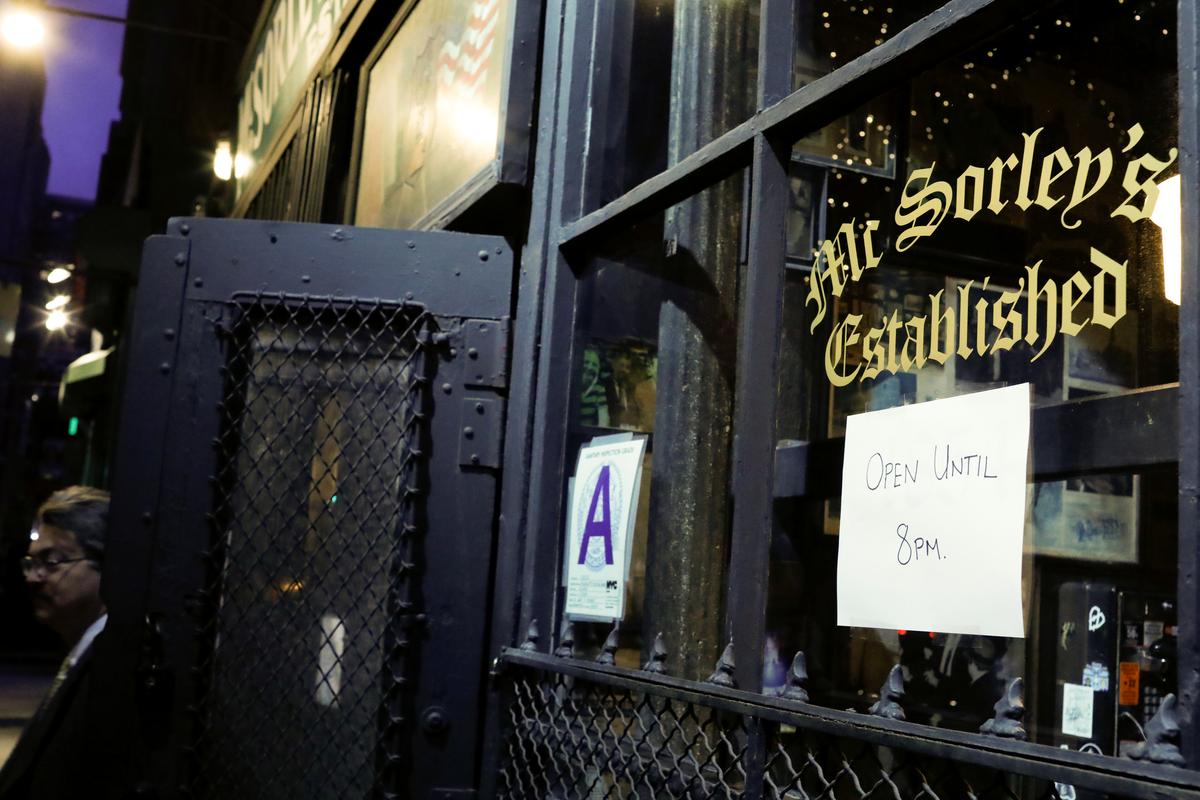 NEW YORK/BOSTON (Reuters) – Orla Sweeney, manager of Connolly’s Irish pub in New York City, expected St. Patrick’s Day to once again be one of her bar’s most profitable days of the year.

A sign is seen on the window at McSorley’s Old Ale House, which, established in 1854, is referred to as New York City’s oldest Irish saloon and was ordered to close at 8:00pm as part of a city-wide order to close bars and restaurants in an effort to slow the spread of coronavirus the day before Saint Patrick’s Day in Manhattan, New York City, New York, U.S., March 16, 2020. REUTERS/Andrew Kelly

Instead, the pub near Times Square was shuttered on Tuesday, like hundreds of thousands of dining establishments across the United States as state governments enforced closures to control the spread of COVID-19. Sweeney broke the news to her employees on Monday after Governor Andrew Cuomo ordered all restaurants to close that night, and they broke down in tears.

“They were like, ‘Well when can I come back to work?’ And I’m like, I’m not really sure,” Sweeney said. “In this industry, they live week to week, day to day, and right now they have nothing.”

There should have been corned beef, bagpipe music and parades, but the streets of major U.S. cities on Tuesday were desolate as local authorities banned parades in cities from New York to San Francisco to slow the spread of the virus that has infected more than 4,400 Americans and killed at least 80.

Even in the holiday’s native country of Ireland, the government on Sunday ordered all pubs to shut down after videos of crowded pubs in Dublin ignited a social media uproar over the possibility of contagion (nL8N2B80U6)

Pubs and bars across the United States normally count on St. Patrick’s Day and the March Madness college basketball tournament to bring in a large part of their annual revenue.

“Obviously St. Patrick’s Day is one day. This is our future,” said Kim Kolbert, the manager of Playwright’s Irish Pub in midtown Manhattan.

U.S. consumers had been forecast to spend some $6 billion on St. Patrick’s Day celebrations this year, according to a survey by the National Retail Federation conducted in early February, before the coronavirus pandemic hit the United States in earnest.

The respiratory disease’s spread has left the hospitality industry in the lurch, as workers are barred from their jobs that involve person-to-person contact but have no livelihood without them.

In the Massachusetts town of Scituate, near Boston, where a large population of Irish immigrants and descendants typically celebrates the holiday in full force, the manager of The Voyage Irish Pub & Restaurant said she would be laying off most of a staff of 50 people, except for a few to prepare takeout meals.

Massachusetts Governor Charlie Baker ordered a stop to on-site consumption at bars and restaurants for three weeks starting on Tuesday.

“It’s sad. We have to say goodbye to people for now and I don’t know when I can take them back,” manager Roo Graham said. Still, she said she believed the state’s move was necessary, saying: “It’s the safest thing to do. We don’t want anybody getting anybody sick.”

‘AS MUCH CORNED BEEF AS YOU HAVE’

Connolly’s in New York also feeds its staff daily, meaning that its laid-off staff must now find other ways to eat in addition to paying their bills.

“You’re trying to do the right thing by society, but people have to live,” Sweeney said. “I just hope that when it all calms down and settles, that we’ll have places to come back to.”

Several Irish pubs had excess food ready for St. Patrick’s Day customers and needed to find other places for it when they heard the decisions by governors to close restaurants and bars just before the holiday.

Some, like Murphy’s Grand Irish Pub in Alexandria, Virginia, near Washington, were considering selling family meals for delivery, while others, like O’Shaughnessy’s in Chicago, sold off as much corned beef and cabbage as they could at a 25% discount on Monday before splitting up the leftovers and giving them to staff.

At O’Lunney’s in New York City, manager Maureen Lunney said one loyal customer raced in to get food before it was too late.

He said: ‘I’ll order as much corned beef as you have. I’ll take it with me!’”