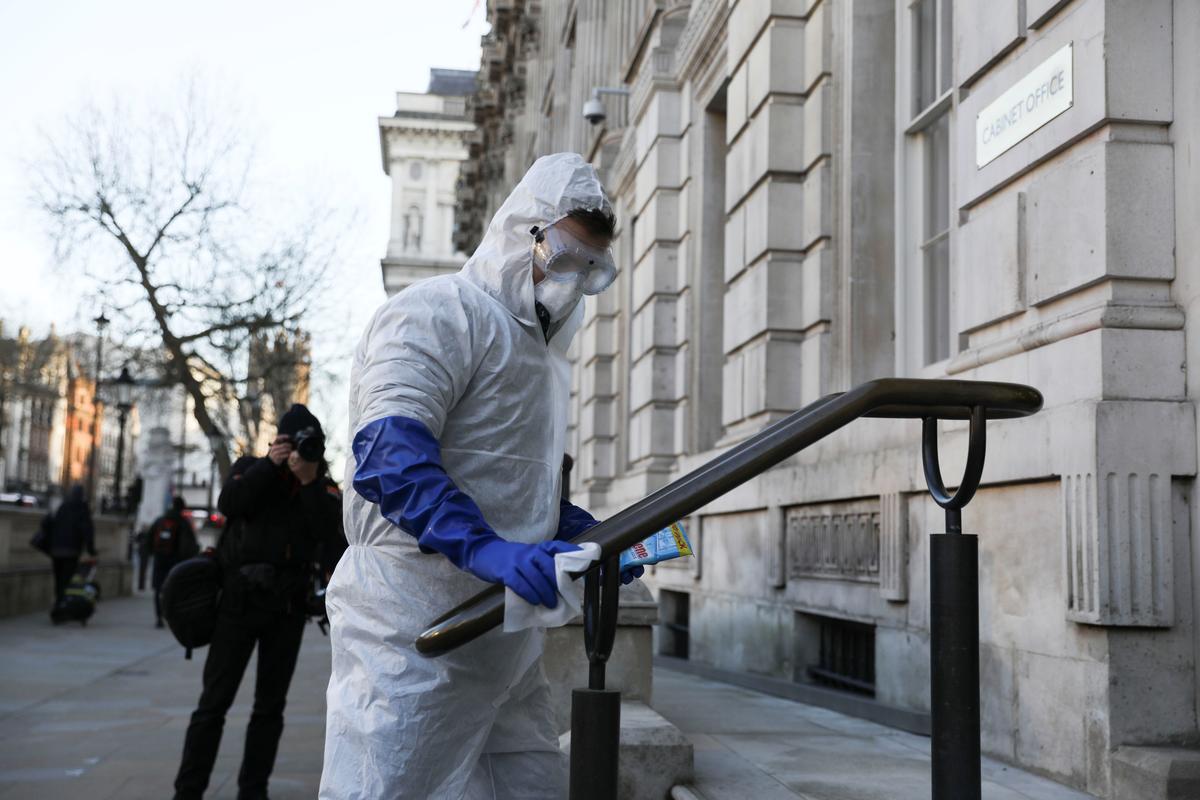 LONDON (Reuters) – British Prime Minister Boris Johnson unveiled much more stringent measures to tackle the coronavirus outbreak after new research indicated a quarter of a million people would have died under previous plans to control the spread of pandemic.

FILE PHOTO: A man in a protective suit cleans a hand rail as the number of coronavirus cases (COVID-19) grows around the world, in London, Britain, March 16, 2020. REUTERS/Simon Dawson

The modelling study, by Imperial College, and led by Professor Neil Ferguson, an expert on the spread of infectious diseases, was published on March 16. It is entitled the “Impact of non-pharmaceutical interventions (NPIs) to reduce COVID19 mortality and healthcare demand.”

This study helped change the British government’s position, according to those involved with the decision. The government said it had accelerated its plans “the advice of the experts”.

Below are some of the findings of the research:

** If no action had been taken against the virus it would have caused 510,000 deaths in Britain and 2.2 million in the United States, the study said.

“The epidemic is predicted to be broader in the U.S. than in GB and to peak slightly later. This is due to the larger geographic scale of the US, resulting in more distinct localised epidemics across states,” the study said.

** The British government’s previous plan to control the virus involving home isolation of suspect cases, but not including restrictions on wider society, could have resulted in 250,000 people dying, the researchers said.

The approach would “likely result in hundreds of thousands of deaths and health systems (most notably intensive care units) being overwhelmed many times over,” the study said.

** The study said that a strategy of draconian restrictions was the best way to tackle the virus.

“We therefore conclude that epidemic suppression is the only viable strategy at the current time. The social and economic effects of the measures which are needed to achieve this policy goal will be profound,” the study said.

“Many countries have adopted such measures already, but even those countries at an earlier stage of their epidemic (such as the UK) will need to do so imminently.”

** The study said that 9% of people in the most vulnerable age group, 80 and older, could die if infected.

** The health impacts from coronavirus are comparable to the devastating 1918 influenza outbreak.

“The last time the world responded to a global emerging disease epidemic of the scale of the current COVID-19 pandemic with no access to vaccines was the 1918-19 H1N1 influenza pandemic,” the study said.

** To curb the epidemic, the restrictions being in place until a vaccine was found in 12 to 18 months, the research said.

“The major challenge of suppression is that this type of intensive intervention package – or something equivalently effective at reducing transmission – will need to be maintained until a vaccine becomes available (potentially 18 months or more) – given that we predict that transmission will quickly rebound if interventions are relaxed,” the study said.