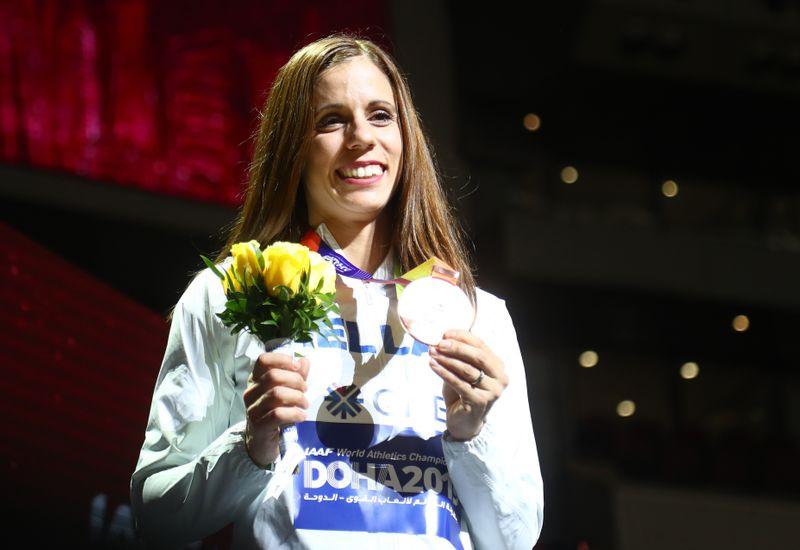 ATHENS (Reuters) – The International Olympic Committee is putting the health of elite athletes at risk by telling them to continue training for the Tokyo 2020 Games as the coronavirus rages, reigning Olympic pole vault champion Katerina Stefanidi told Reuters on Tuesday.

“There is no postponement, no cancellation. But it (the IOC) is putting us at risk,” the Greek said in an exclusive interview.

“We all want Tokyo to happen but what is the Plan B if it does not happen? Knowing about a possible option has a major effect on my training because I may be taking risks now that I would not take if I knew there was also the possibility of a Plan B,” Stefanidi added.

“We have to decide whether to risk our health and continue training in the current environment.”

The IOC did not immediately respond to a request for comment.

The body will hold a call with its National Olympic Committees on Wednesday, and had earlier in the day repeated its commitment to stage the Games in the Japanese capital from July 24 to Aug. 9, urging athletes to continue with their training despite mounting speculation about the impact of the virus on the Games.

“The IOC remains fully committed to the Olympic Games Tokyo 2020, and with more than four months to go before the Games there is no need for any drastic decisions at this stage,” it said in a statement.

“Any speculation at this moment would be counter-productive,” it added, less than an hour after European soccer body UEFA postponed its 2020 European Championship to 2021.

The virus, which has so far infected close to 200,000 people worldwide and killed more than 7,500, has forced many countries into lockdown to contain it.

“From January until now the situation has deteriorated dramatically and in the same period the IOC has repeated the same things,” she said.

Greece has reported 387 cases of COVID-19, including five deaths and the government has ordered a shutdown of retail businesses with some exceptions, effective Wednesday. All sports facilities have been shut for a week already.

Greece will also shut its borders to any individual other than Greeks and EU residents unless they have a special permit.

“The IOC put us in a difficult position. How can we train in these conditions and these health risks,” Stefanidi, who is also a candidate for the IOC’s athletes commission at elections set for the Tokyo Games, said.

“The stadiums have been closed for a week. Tomorrow we may get a special permit to get in and train. But how can you train there, touching the same equipment and surfaces. And what about team sports, or gymnastics, or swimming.”

“I would like to see that there is a concern for the risk to our health. It is good to say that in four months it will all be fine. But what about now? I want to see what they do about now. I want to hear about a Plan B,” she said.

Stefanidi said the different levels of training had also created a potentially unfair advantage for some athletes.

She said some countries had shut all facilities, while in some other countries like the United States or Sweden, some facilities were still open.

“My rival Sandi Morris for example has been training the past week because her facility is still open,” she said.

“We have to have a realistic image from the IOC. They have to show that they understand.”