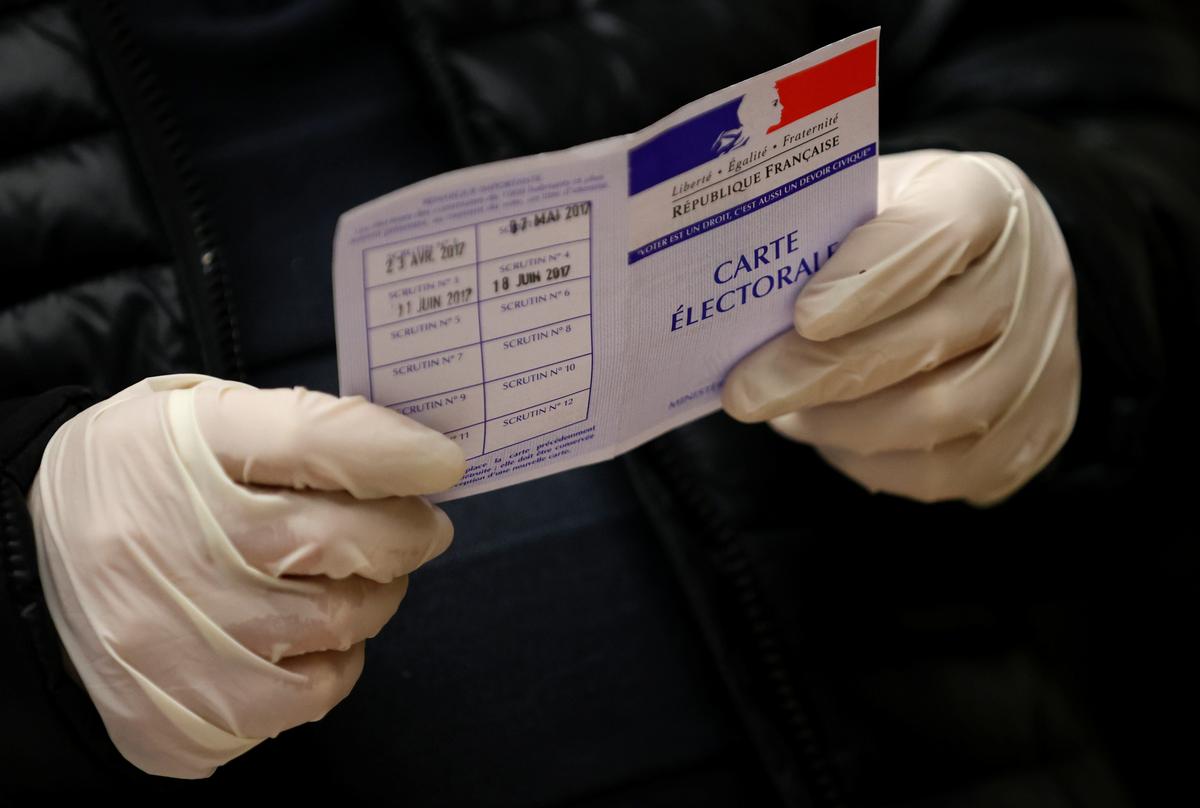 PARIS (Reuters) – Voters turned out in low numbers in France’s mayoral elections on Sunday after the government imposed stringent restrictions on public life to curb the spread of the coronavirus, though many headed outdoors to enjoy the warm spring sunshine.

An official wearing latex gloves holds an electoral card at a polling station during the first round of mayoral elections in Strasbourg as France grapples with an outbreak of coronavirus disease (COVID-19), in Strasbourg, France March 15, 2020. REUTERS/Christian Hartmann

Many expressed bemusement after Prime Minister Edouard Philippe’s announcement on Saturday that the vote would go ahead even as he declared all cafes, bars, cinemas and non-essential shops would close until further notice.

Even after Macron pressed ahead with the first round, saying it was critical that democracy followed its course, some opponents questioned how a second round could be held in a week as the number of deaths and infections spirals higher.

Fewer than 40 percent of registered voters had cast a ballot at 1600 GMT, when only an hour’s voting remained outside the big cities, confirming concerns that abstentions could eclipse the previous lowest turnout in 1971.

Yet people appeared to ignore the health warnings when it came to their social life.

In the gardens of the Louvre Museum and along the banks of the River Seine in the capital, hundreds of people strolled, picnicked and drank in the spring sunshine.

Marseille’s old port was packed with people determined to enjoy the warm temperatures.

“We’re worried like everybody, but it’s sunny. We’re not close to people and we’re not touching them,” said writer Marc Roger,62.

The Public Health Authority reported that the virus had now killed 127 people in France, up more than a third on the previous day, and that more than 5,423 were infected.

Macron said his government had been forced to toughen its steps because people were being too lax in how they protected themselves from the virus.

Far-right leader Marine Le Pen called for the government to order a nationwide lockdown, similar to those imposed in Spain and Italy and controlled by security forces.

Philippe’s office declined to comment on whether France was heading toward taking similar steps.

In polling stations across the country, people were visibly cautious, trying with difficulty to keep a safe distance from each other.

One voter, Pascale, 59, who gave only her first name and who was wearing a mask and gloves after voting in Paris’ 7th district, said it seemed irresponsible to hold the vote.

“I’ve got a lot of friends and family that will not go even if they usually carry out their civic duty,” she said.

Poll clerks wore latex gloves, offered disinfectant and marked out lanes with arrows on the floor showing where people should stand while waiting for their turn. Some voters wore gloves and brought their own pens to sign off their vote.

“I am going to vote and keep living my life no matter what. I am not scared of the virus,” said another voter, a 60-year-old woman who asked to be identified only as Martine as she entered a polling station in Paris’ 16th district.

Philippe suggested on Saturday the election’s second round on March 22 could be pushed back. If the second round does not go ahead, the first round is likely to be annulled.

The elections are an important test for Macron, whose presidency has been roiled by public unrest, first from the “yellow vest” protesters angered over the cost of living and more recently over his pension reform plans.

His party is not expected to do well in the vote for France’s 35,000 city, town and village halls, and which is critical for anchoring power at a local level.