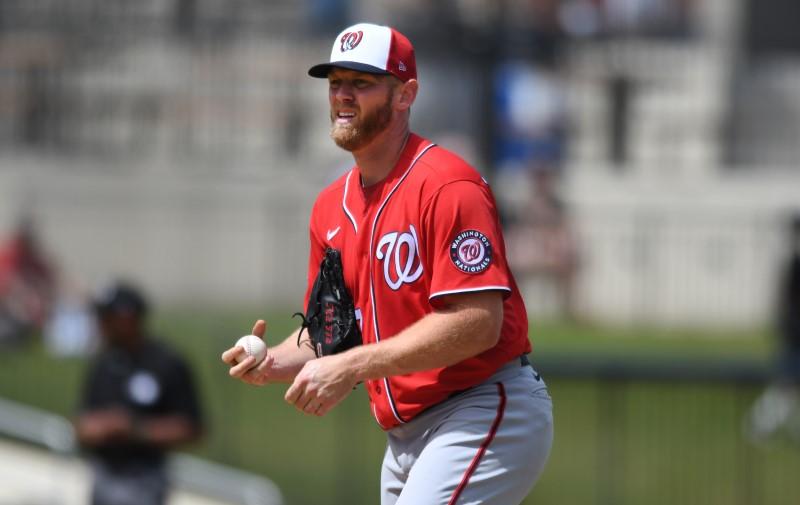 Right-hander Stephen Strasburg, the reigning World Series Most Valuable Player, enjoyed his strongest spring outing as his Washington Nationals rallied for a 6-2 win over the Houston Astros in West Palm Beach, Fla.

On the heels of his two victories over Houston in the 2019 World Series, Strasburg went five innings and allowed one run and two hits. He struck out four without a walk.

The Nationals trailed 1-0 entering the ninth inning, but exploded for six runs in the frame with the help of five hits, four walks and two wild pitches — both of which allowed runs to score. Emilio Benifacio went 2-for-2 with a run scored for Washington. Bryan De La Cruz homered for the Astros.

Austin Slater singled and doubled, knocking in two runs, as visiting San Francisco beat Texas in a rain-shorted game that was called after five innings in Surprise, Ariz. Sam Travis homered for the Rangers and Todd Frazier drove in a pair with a double.

P.J. Higgins hit a game-tying double in the seventh, and a two-run error later in the inning led Chicago to a win over a San Diego split squad at Mesa, Ariz. Padres starter Cal Quantrill threw three scoreless, hitless innings, striking out three.

Kansas City’s home game against Cleveland was called off because of inclement weather in Goodyear, Ariz., after a steady downpour made field conditions too difficult to play. The game will not be made up.

The Chicago-Colorado game was canceled after rain prevented the start of the game in Scottsdale, Ariz. No alternative makeup date is expected to be announced.

After the start of the game was initially pushed back because of rain, the game between Oakland and Los Angeles was later canceled because of inclement weather in Tempe, Ariz. No makeup date has been scheduled.