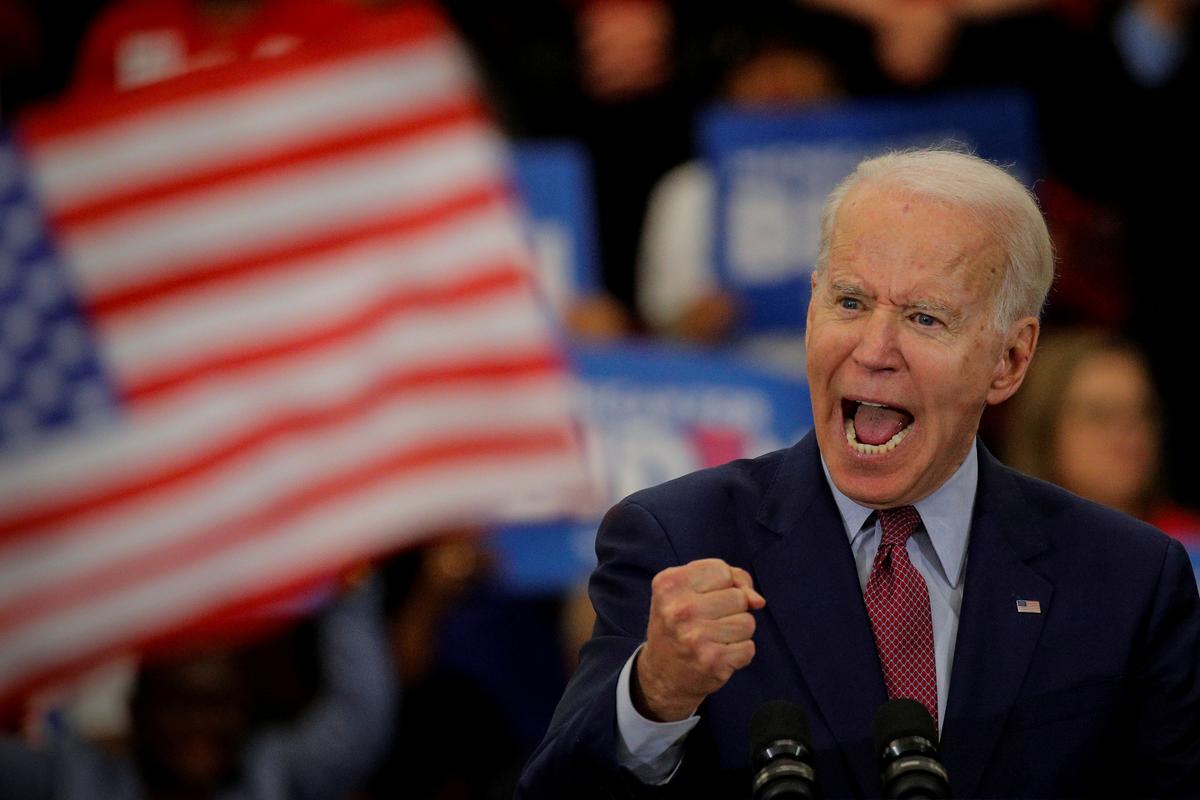 DETROIT (Reuters) – Joe Biden hopes to take a big step toward the Democratic presidential nomination on Tuesday when six states cast votes, while Bernie Sanders aims for an upset win in Michigan that would keep his White House hopes alive.

Biden, who claimed the position of Democratic front-runner with a sweeping series of wins last week in Super Tuesday nominating contests, could build a formidable lead in the race to pick a challenger to President Donald Trump with another round of decisive victories.

The biggest showdown between Biden and Sanders will take place in Michigan, a blue-collar battleground where Sanders sprang a stunning 2016 upset over Hillary Clinton that ensured a long nominating fight – something Biden hopes to avoid this time.

With 125 delegates, Michigan is the largest prize of the six states voting on Tuesday, when a total of 352 delegates to July’s Democratic convention will be up for grabs.

Since last week’s romps, Biden has roared into the national lead in polling and delegates, knocked out his remaining viable rivals except Sanders and swept up another wave of endorsements from prominent Democrats and former rivals such as Senators Kamala Harris and Cory Booker.

Democrats worried that Sanders’ democratic socialist proposals to restructure the economy would doom the party to defeat in the November election have rushed to rally behind Biden, who was vice president under Barack Obama.

“Sanders scares me a little bit,” said J.R. Watkins, a 32-year-old civil engineer, after voting for Biden on Tuesday at a church in downtown Detroit. “That would be the number one reason for voting for Biden.”

Biden has a double-digit lead in the four most recent polls taken in Michigan. But Clinton held a similar polling lead in Michigan over Sanders, a senator from Vermont, before the 2016 primary.

Trump wrote on Twitter on Tuesday, “Going to be a BAD day for Crazy Bernie!”

Biden, whose resounding wins in South Carolina and on Super Tuesday were powered by strong support among black voters, hopes to receive a similar boost on Tuesday. In 2016, about one-fifth of Democratic primary voters in Michigan and Missouri, and an overwhelming 70% in Mississippi, were black.

In Michigan, Sanders has criticized Biden’s past support for global trade deals such as the North American Free Trade Agreement which is blamed in Michigan for costing jobs.

In Detroit, Josh Greenwood, 48, said he voted for Sanders on Tuesday because he is the “complete opposite” of Trump, while Biden’s record is questionable.

“He’s also really a Republican in my view,” Greenwood, who owns a downtown coffee shop, said of Biden. “His voting record shows that he’s voted against all of his party’s interests for his entire career.”

Biden has countered by recalling the Obama administration’s decision to bail out the auto industry, an economic pillar in Michigan, and help its biggest city, Detroit, navigate a municipal bankruptcy.

On Tuesday morning, he visited Detroit’s first new auto assembly plant in decades, which is owned by Fiat Chrysler Automobiles NV, and met with workers from the International Brotherhood of Electrical Workers (IBEW) labor union, which endorsed him in February.

“Unions built the country,” Biden said, yelling through a bullhorn. “You’re the best damn workers in the world.”

A Biden breakthrough in Michigan, and big victories in Missouri and Mississippi, where he is heavily favored, would put him in prime position to strike a virtual knockout on Sanders in next week’s March 17 contests, when the big states of Florida, Ohio, Illinois and Arizona all cast votes.

By the end of March, about two-thirds of the delegates up for grabs will be allocated. Heading into Tuesday’s voting, Biden leads Sanders by 628-545 in pledged delegates, according to Edison Research. A total of 1,991 is needed for the nomination.

The other big state where Sanders hopes for a win on Tuesday is Washington, which has 89 pledged delegates. Sanders beat Clinton there in 2016, when the state held caucuses, but it has switched to a primary this year and recent polls show a close race.

Idaho and North Dakota, with 20 and 14 delegates respectively, also supported Sanders in 2016 but are expected to be more competitive this time.